Somewhere for the annoying and/or off-topic threads to go. Feel free to post about whatever, but abuse will still be dealt with, and possibly with more force. Especially pac-porno.

Chad,
I too hope Agassi wins this one. Good comeback, although Pavel looked to run out of fitness in the end.
Next match might be Andre's last, it will be tough anyway. It's against Cyprusian called Bag-Man, eh...Baghdatis.

Raining in New York now, play suspended. Eurosport has very good coverage for USO: all evening - all night plus reruns daytime.
Finnish commentator said "could you imagine they would play Beatles during breaks at Wimbledon". Americans do know their show-business

ln2 wrote: Navratilova was paired up with Hingis for women doubles for years.... and won almost everything.

Not sure if they were ever a team, I never heard them playing together...And I'm a huge Martina fan(guess which one). Hingis was paired longtime with Anna Kournikova...they were "the spice girls of tennis". This is the last USO for Navra, again...
Top

certainly the crowd and the insane down 4-0 come back got to pavel. But even at Pavel's best, Andre was matching him and coming up on top, a good sign he might have trained harder for this one. Still a weak triple tie break victory not the start of a non ranked champion's run but we can hope :) at least he has a day to rest.
-skito
Top

The TJT wrote:Not sure if they were ever a team, I never heard them playing together...And I'm a huge Martina fan(guess which one). Hingis was paired longtime with Anna Kournikova...they were "the spice girls of tennis". This is the last USO for Navra, again...

oh ok, maybe I am remembering it wrong then.
I know that Hingis with someone dominated the doubles for a few years....maybe was Kornikova.

Hingis would drop out of the doubles though if she reached the semifinals in singles.

Maybe with Martina Nav... I am thinking of longer ago...

I forget who she was paired with back then.

She also has done very well in mixed doubles with various teammates.

I am sure her titles are listed somewhere. She has a ton of doubles titles.
Top

Andre Agassi just played hes last pro match, emotional moments out there. For the records, he lost to a German player named B. Becker.

the tjt wrote:Will he be stopped, ever?! ]

Nadal just set up a semifinal showdown in Barcelona against Ferrer by beating this Italian player named Scarfac...oops...Starace 6-2, 7-5.
First set was easy for Rafa, playing aggressive and going for hes chances. At beginning of second he struggled a bit seemingly losing hes concentration and intensity after easy first set.
This was his 70th consecutive claycourt win!

Oh, and that Monte Carlo final against Federer was 6-4, 6-4 for Rafa, second set was pretty much Nadal dominating play.
Top

71 : I saw yesterday semifinal Nadal vs Ferrer, Ferrer was leading 5/4 (2 points away the set) then ... 7/5 6/1 in less than 30 minutes.
Now waiting for final against Canas (the man who has beaten Federer twice last month)
Top

Nadal - Canas 6-3, 6-4, one break each set. Imo Nadal brought hes A-game in to the final. No way anybody could have beaten him today. Canas fought bravely. 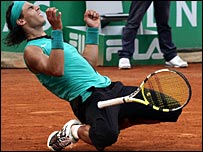 There is no spoon
Top

Nadal, ranked No. 2 in the world behind Federer, had been unbeaten on the surface since April 2005, a run that included 13 titles.

Federer's come-from-behind win was his first over Nadal on clay in six matches.

Let's see Rafa take his own back at French Open!
Top

I'll put this pic up, before Federer's surprise loss in semis...

Return to “The Pit”